An end to mandatory retirement will change the way advisors plan for clients’ post-work lives.

Regardless of when a person chooses to retire, the amount of income he or she will have to spend depends on how much was saved, the rate of return on that capital, and how long that person will need money after retiring. So what are the practical effects of later retirement on income needs?

Let’s say twin siblings Jack and Jane Sample are both 65. Their younger brother William is 60.

Each has built up registered retirement assets of $500,000. Jack and William will retire this year, while Jane wants to continue working until she’s 70. All three plan to withdraw $50,000 a year from their assets, with a 3% increase each year to compensate for inflation. They are seasoned equity investors, so we’ll assume an average 7% annual rate of return.

Both Jack and Jane enjoyed well-paid careers and lived in Canada for 40 years, meaning they’ve earned the maximum CPP and OAS benefits. Both plan to apply for the OAS immediately. 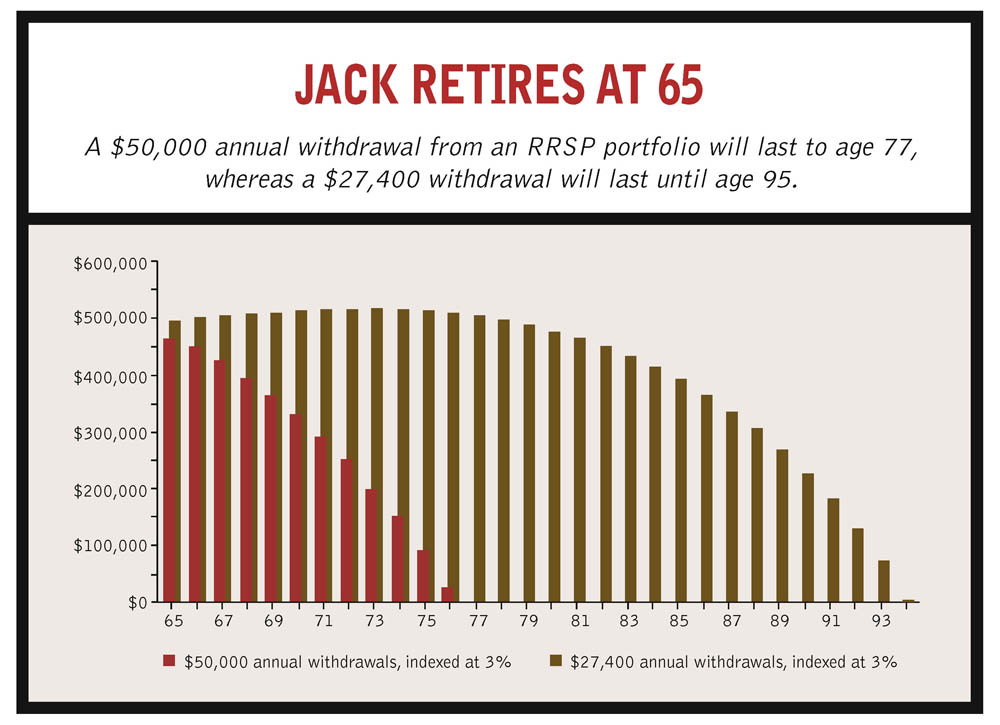 When Jack retires this year, he’ll begin receiving the annual maximum CPP benefit of $9,945, assuming indexation at 1.5%. He’s not so fortunate with the OAS, however, as his net income exceeds the $60,806 OAS threshold, triggering a clawback of $638, which will start to reduce his monthly OAS payments by $53.16 in July 2006 through June 2007.

Under this scenario, Jack’s savings will hold out for about 12 years. After that, he’ll suffer a major loss of income and will have to rely solely on his CPP, OAS and some portion of the Guaranteed Income Supplement (GIS). What to do? The steep drop could be lessened if Jack were willing to adjust his spending expectations from $50,000 to $40,000. Doing that would extend his income until he’s 86, a few years beyond the standard life expectancy of 81. A prudent financial planner, however, should recommend deeper cuts to ensure Jack is protected if he lives beyond age 86. 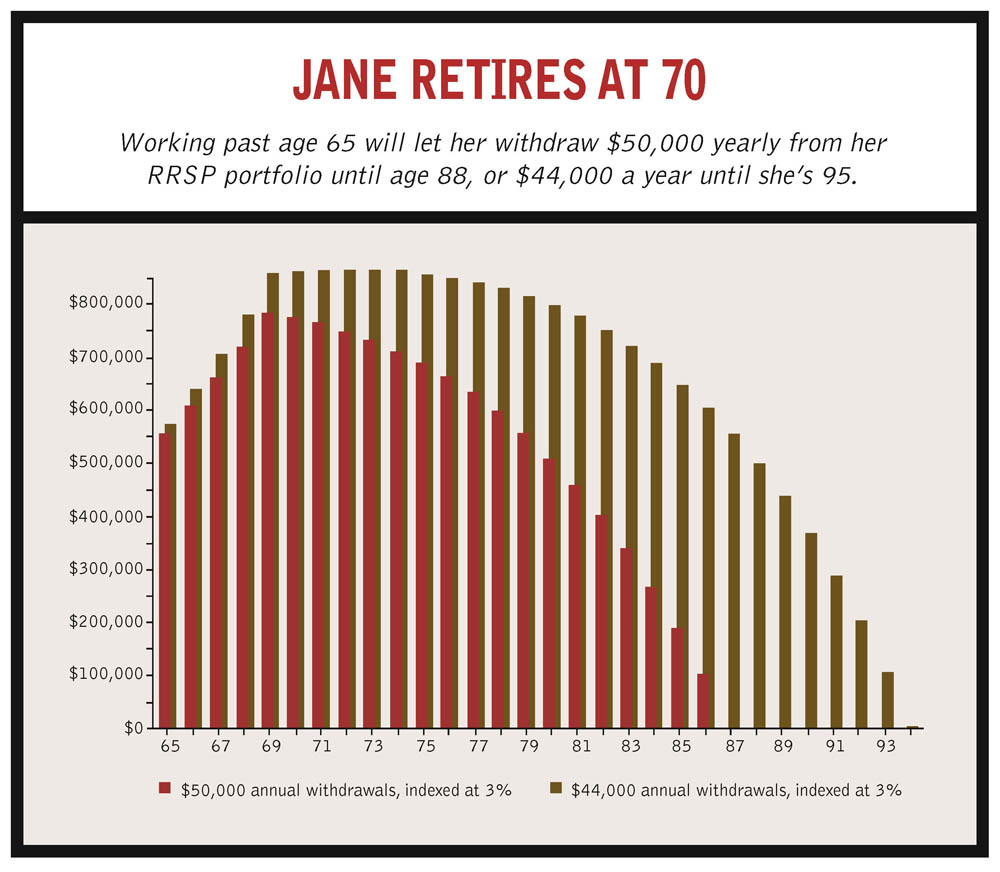 By working five years longer, Jane is putting herself in a better situation. Her assets will grow, and she’ll reduce the number of years spent in retirement. She’ll also receive an annual OAS cheque from age 65 until age 70, allowing her to save $12,000 annually towards her RRSP. Since Jane has already achieved the maximum level of CPP benefit, there will be no further improvement in her basic pension beyond age 65. The CPP’s cessation of employment requirement will be waived after her 65th birthday, so Jane has the option to take the pension while still on the job, or defer it to her 70th birthday. If she chooses to delay her application for CPP, she’ll enjoy the actuarial enhancement of 6% a year, providing 130% of the normal CPP amount at age 70 (0.5% a month after her 65th birthday). However, she will be foregoing approximately $41,000 in income. While Jack’s annual CPP will start at $9,945 (the current maximum), Jane’s 130% pension will start at $14,134 ($12,928, including our assumed 1.5% indexing of the benefit).

The extra five-year deferral of withdrawals, plus her additional savings, will cause Jane’s registered portfolio to grow to $779,284. Like Jack, she’ll need $57,964 a year (the inflation-adjusted equivalent of $50,000 in withdrawals) when she turns 70 in 2010. Under our plan assumptions, that’s enough to fund her income and pay taxes until age 88, just beyond her 86-year life expectancy.

As a result of her higher income, Jane will have $2,862 clawed back during the first year of her retirement. Over the years, as her income increases, this repayment of OAS benefits will grow. So, if Jane reduces her withdrawals to $51,982 ($44,000 adjusted for inflation) starting at age 70, her retirement assets will last until age 95.

If Jack and Jane had saved part of their retirement nest eggs in non-registered investments, they might have reduced taxes payable during retirement. A portfolio of dividend-paying stocks or dividend mutual funds would have provided a more tax-efficient income and reduced the OAS clawback.

Meanwhile, their 60-year-old brother, William, also decided to retire this year with a similar capital sum. As it stands, his savings will last only 12 years. He can start an early CPP pension, reduced by 30%, but must wait until he is 65 to apply for his OAS pension. To make his income last to age 95, he would have to reduce his annual spending from $50,000 to $24,311. 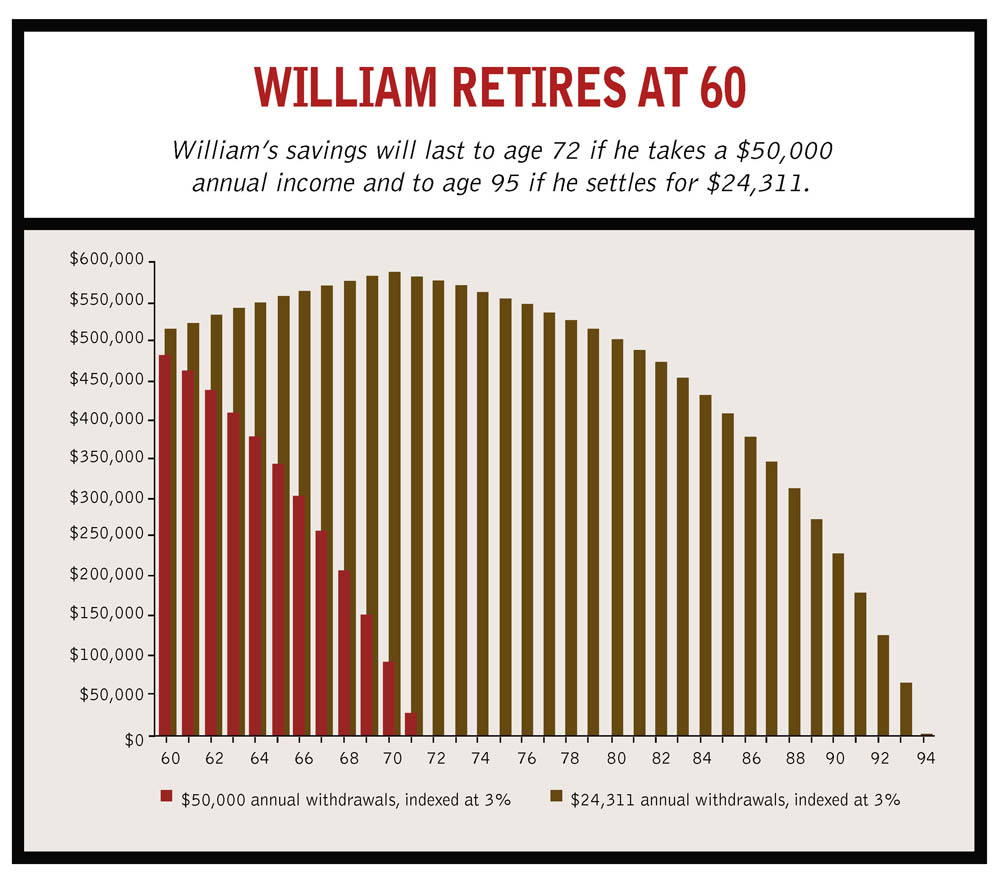 If William continued to work until 65 or 70, his situation would be much improved. But it would also require some planning and strategy changes. Specifically, he should stop saving in a registered plan because he has already built up considerable registered assets that will be fully taxable upon withdrawal. Instead, he should put an amount similar to Jane’s into a non-registered investment portfolio, primarily producing capital gains income to reduce future taxes. Such a plan would allow him to withdraw $50,000 yearly, starting at age 65, resulting in a nest egg that would last until age 83. However, if he works until he’s 70, his savings would last until age 97.

This article appeared in The Advisor’s Edge magazine in May 2005. Reproduced with permission.

About the Author: Mike Berton

Mike Berton works with his clients to design and and implement their personal life plan for retirement and for their legacies, educating them as to the reasons for each recommendation. He also teaches other financial planners: he has been on the faculty with BCIT and Trinity Western University for many years. Mike is active with Advocis and the Institute of Advanced Financial Planning.